a nutshell: in a letter addressed to Africa from Samzi Dikinfa of Erquifa, this short yet immensely powerful piece of prose shares an insight into the complexities around why someone might leave a homeland – not necessarily by choice

an image: I found myself moved by the portrayal of being surrounded by ‘professional’ drunks, while the self-described deserter thirsts not for alcohol but rather for a bit of justice and freedom

a thought: I wondered whether there was any significance to the date of the letter, 15 August 1990, and discovered through the internet that it was on this day that at least 150 people were killed in clashes between the African National Congress and Inkatha Freedom Party, South Africa

a fact: this story won a prize in a competition by radio station Africa No. 1 and features in the 1992 collection Kilomètre 30, which I managed to get a copy of through Better World Books – its arrival was quite poignant, as it was the very final book to arrive for my entire project

please note I read Keïta’s poetry in her original French, so anything ‘lost in translation’ is down to my slightly rusty French!

a nutshell: excerpted from A Toutes les Muses (Mandé Editions), these poems by Malian writer Fatoumata Keïta evoke a lyrical, intimate sense of the hopes, illusions and emotions coursing through the poet

a line: “I invite you into my temple, friend | into the rooms of my firm pen” (“Je t’invite dans mon temple, ami | Dans les pièces de ma plume affermie”) – ‘These Blows’

an image: shaped with exquisite precision as a diamond, Keïta’s poem ‘Rebel Sword’ conjures visceral scenes of earthworms and dust to bring us up close with the mortality we all have in common – I (whether wrongly or rightly) interpreted this poem as an allusion to the Tuareg Rebellion

a thought: I was moved by the poem ‘Tears’, particularly the contrast drawn between the flood of tears and the aridity of harsh times, which prompted me to learn more about the geography of Mali – I learned it’s among the world’s hottest countries with frequent droughts, and the climate crisis has exacerbated conflict over access to water & land

a fact: born in 1977 in Baguinéda, near Mali’s capital Bamako, Keïta’s first job after graduating was editing radio scripts – which perhaps contributed to the amazing musicality of her poetry

want to read Poèmusiques? visit here – collection To all the Muses’ edited by Mandé Editions

a nutshell: published in 2004, this poem from Seychellois poet Nourrice reflects (I think!) a mother’s love for her child and expresses gratitude for the healing power of time

a line: “How patient I have been | Watching the pregnant moons”

a thought: I was delighted to hear from the poet in early September when I reached out to learn more about Seychellois writing

a fact: as shared in this interview, Nourrice is a poet, educator and curriculum development officer known as ‘Miss Flora’, who has made a significant contribution to her country over 25 years 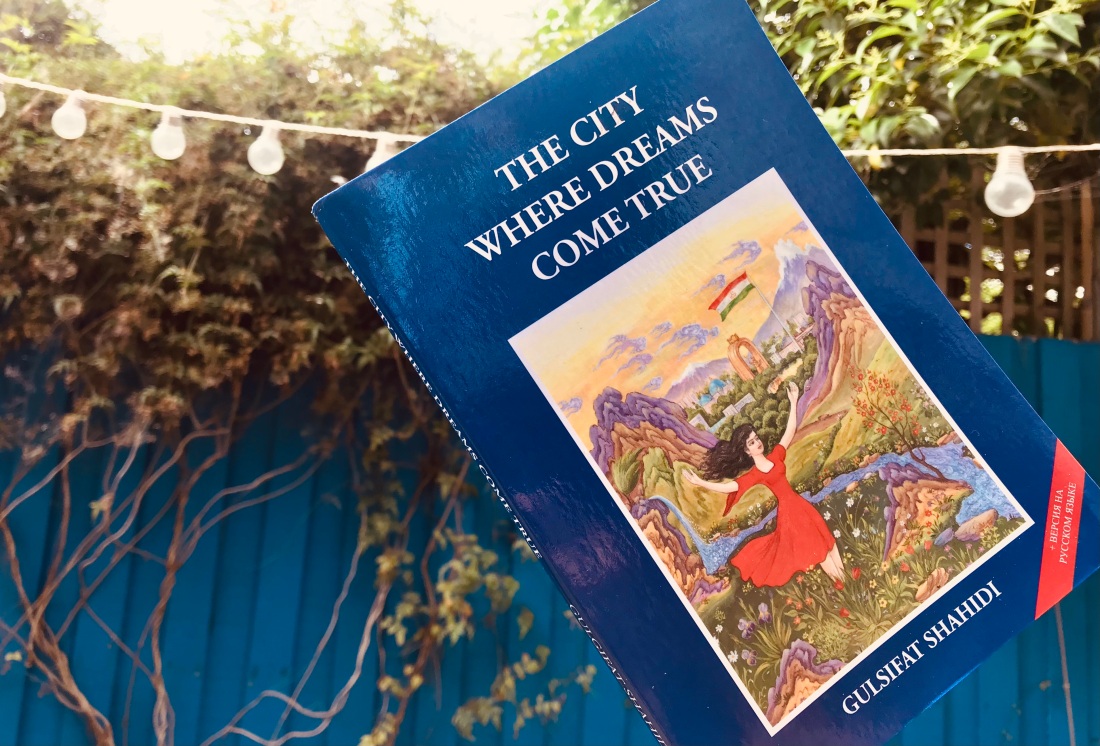 a nutshell: these four stories give a rare glimpse of what life can look like amid social unrest (particularly with reference to perestroika) across three generations in Tajikstan, recounting episodes of love, loss and ultimately hope

a line: “The world is not without good people and it is inherent that I join them at the helm to bring joy, kindness and happiness to others”

an image: I loved the description of memory as an unwritten book (also can’t help but share one of the wonderful illustrations within the pages – see below!)

a thought: time & time again in the books I’ve read during this project there’s been a comment on the depth and breadth of women’s suffering worldwide and this one was no exception, noting how hard it is to be a woman following an account of a predatory older neighbour accosting and later threatening a single mother

a fact: born in Leningrad in 1955, Shahidi graduated in journalism from Tajik University and wrote this collection in Russian – her hope is that the English edition is just the start of it being translated into other languages

a nutshell: this first-of-its-kind book shares deeply personal and often gripping recollections from seven East Timorese families who ultimately made their homes in Melbourne’s City of Casey

a line: “I remember their fear, which for us children translated into terror” (Emilia, Florindo family)

an image: I enjoyed Berta’s anecdote about the first day of courtship with her husband-to-be, Luis, who mistakenly thought he should arrive in the early morning and turned up at the family home when she was out in the fields picking peanuts (Berta, Santos family)

a thought: as demonstrated above, the interviews with family members prompted a mixture of heart-rending and light-hearted memories – I learned a great deal from this book and it is a real credit to the students and community members who were involved in making it

a fact: the chronology of East Timor’s key historical events was v useful, and I was happy to see it originated from the Alola Foundation (an org I came to know through my work with IWDA) – here’s an online timeline

want to read From Timor Leste to Australia? visit here

a nutshell: described as one of the ‘foremothers of Pasifika poetry’, Molisa published this poetry collection in 1983 with black stone as a reference to vanua, i.e. Vanuatu’s black solidified lava base

an image: in ‘Victim of Foreign Abuse’ I was struck by Molisa’s description of natives stateless on their own land while exploiter colonisers milked her dry

a thought: my interpretation of Molisa’s poetry was helped greatly by Selina Tusitala Marsh’s article in Cordite – Marsh notes that, like black stone, Molisa has been a foundational creative & critical force in the formation of Vanuatu as a postcolonial nation

a fact: in 1977 Molisa became the first woman from Vanuatu to gain a university degree – a Bachelor of Arts at the University of the South Pacific

a nutshell: these are stories from the extraordinary life of Lesotho elder and matriarch Nthunya, stretching from her birth in 1930 to the conversations that formed this book in the late 1990s

a line: “Maybe if there is one day enough for the hunger to stop, we can stop being so jealous of one another. If the jealousy is no more, we can begin to have dreams for one another. We can build something new”

an image: I liked how chapter 11 took its title from a motto in Lesotho – khotso, pula, nala, that is, peace, rain, prosperity

a thought: as so often throughout this project, I had reason to feel ashamed of my heritage – before independence, every man (no matter how poor) had to pay tax to the British or he was imprisoned; Nthunya’s family was so pleased when they no longer had to pay that they named a child born in the year of independence ‘Muso’, meaning Government

a fact: through her job as a domestic worker Nthunya became friends with American writer Kendall while she was studying on a Fulbright scholarship, and it was Kendall’s idea to document Nthunya’s life – this autobiography is a collaboration between the pair

want to read Singing Away the Hunger? visit here

a nutshell: Brovina’s lyrical poetry* powerfully bears witness to the violence and tension in Kosova across the late 20th century

a line: “Flowerpots hurtling through the air | Know nothing of the curfew” (‘The year 1981’)

an image: in ‘Exodus’, Brovina describes flowers walking hand in hand towards the sun while behind them grows flowerless grass

a thought: moving beyond the poems I had read, I was (i) shocked to discover Brovina was abducted in 1999 and accused of ‘terrorist activities’ under Article 136 of the Yugoslav Penal Code (ii) moved by her declaration during proceedings in which she said her objective had been to dedicate herself as a doctor, poet and woman to rights for women

a fact: in March and April 1981, Kosovo Albanians took to the streets in peaceful protest to demand more autonomy within the former Yugoslavia – this was met with tanks and troops

want to read some of Brovina’s poetry? visit here

[*note: I read a selection of the poems available online]

a nutshell: published in 1980, this wide-ranging book draws on the Princess’s love of all things flower-related – from garden clubs to poetry about flowers, from floral ingredients for potions to bridal bouquets (and much more)

a line: “For flowers have a language of their own that transcends international barriers. As with music, there is also a timelessness about flowers and a sense of communication”

an image: the Princess’s portfolio of pressed flowers were beautiful to flick through – I had no idea it could be so intricate & creative

a thought: I learned a great deal in the chapter on fragrant gardens and among those singled out was the boronia bush’s exquisite scent, which apparently I need to seek out specifically while living in Australia

a fact: in detailing the etymology of ‘rose’, the Princess recounts the story of how famed Corinthian Rhodanthe took refuge from her suitors in the Temple of Diana only for them to break in, leading to the goddess turning Rhodanthe into a rose and the suitors into thorns

want to read My Book of Flowers? visit here