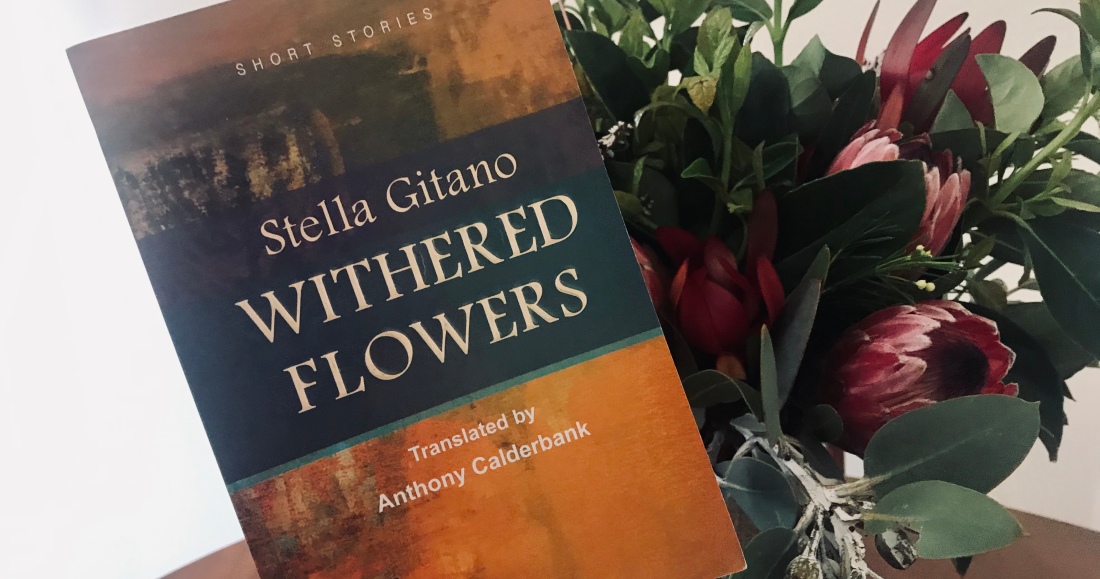 a nutshell: this stunningly unqiue short story collection shares glimpses of daily life in South Sudan, from scene of raids to breastfeeding, pickpocketing to thunderstorms

a line: “the real diseases were poverty and displacement and war”

an image: a mother tries to amputate the memory of a distressing period, which has grown like an unwanted limb on the body of her life – serving no purpose but to disfigure it

a thought: I was touched by the unconditional loyalty of a brother to his sister, both of who live in abject poverty; he sees her as a mermaid as the top and bottom of her body are different, since she is paralysed from the waist down since she had polio

a fact: in the author’s note, I learned that Gitano has a Bachelor of Pharmacology from Khartoum University and is passionate about helping to solve matters concerning women and children in South Sudan

a nutshell: set in Madagascar, this entrancing short story follows the myriad efforts (including rituals, hymns & feasts) of a young twin to bear a child with his French vazaha wife

a line: “the white wife, she leaped from one discovery to the next, astonished by ordinary things, like the colour of the water, the green of the forest, the singing bamboo, and their sparkling laughter”

an image: I loved reading the narratorial perspective on the couple’s house on the bamboo hill – distinct from the huts in the village – with its many dividing walls, rooms for specific purposes, and puzzling objects

a thought: it was interesting to learn that the other twin called his sister-in-law vady lova (‘the wife to be inherited’ – as was customary in the case of his brother’s death)

a nutshell: from FGM to contraception, gender-based violence to witchcraft, this rigorous book explores the status of women’s rights in Burkina Faso through the country’s colonial period and beyond

a line: “In Burkina Faso as elsewhere, women are fighting for the recognition that before their womanhood there is their humanity. It is in the name of this humanity, which they share with men, that women demand equal opportunities and rights.”

an image: in a moving quote from a victim of female genital mutilation, we’re asked how this could be a practice that represents the work of God, the figure who supposedly bestowed these very organs – how could these people carrying out the mutilation claim to know better than God?

a thought: in chapter 7, Ilboudo questions why traditional gender roles appear to be so fixed and notes the usual response, « il y a des tâches féminines et il y a des tâches masculines! » (there are female tasks and male tasks), which struck me as identical to former UK PM Theresa May’s remark “There are boy jobs and girl jobs, you see”; Ilboudo comments that “women’s work” never finishes

a fact: Ilboudo’s novel Si Loin de Ma Vie (So Distant From My Life) is currently being translated by Sierra Leonean-Ugandan writer & translator Yarri Kamara, who won the 2020 PEN/Heim Translation Fund Grant to complete her translation

a nutshell: recalling her childhood in 1950s Malawi, the narrator – Kamu – tells the story of her fraught teen romance with a European boy named Charlie

a line: “Unfortunately, love, amour, kutemwa, kupenda – call it what you will – is not that rational”

an image: it has been some time since I read such a quintessentially teenage moment as when Kamu finds herself pondering whether ‘that boy’ had a PhD in being handsome

a thought: this short novel is not all just fleeting lust and angst-ridden teen dramas, it also delves into the racialised society in which Kamu grows up – the young girl’s ongoing struggle with the taboo of associating with white Europeans is made very clear from the earliest pages

a fact: born in 1936, Gondwe was the first Malawian woman novelist to have her work published – in 1999 she founded a charity, Vinjeru Education, to provide educational resources to schools in Malawi’s remote regions

want to read I Still Miss Him? visit here

a nutshell: adopted from an orphanage in Eritrea by white parents in 1974, Pool grew up in the UK under the assumption that she has no birth family – that is, until she receives a letter from a brother, leading her on a journey to reunite with them ten years later

a line: “It’s tattooed on your psyche: love is temporary”

an image: for me the most vividly interesting passages in the book were where Pool describes her visits to the family’s villages – the landscape, buildings, habits, festivities

a thought: in order to avoid spoilers, all I’ll say about p.115 is that it moved me to tears and I can’t imagine how Pool felt in that moment

a fact: while I usually share something I learned here, instead I want to share a few things I’d like to know – what was the response to this memoir in Eritrea? did the criticism of the government in Pool’s epilogue trigger any repercussions for her family? has she been back to Eritrea in the 15 years since the book’s publication?

a nutshell: digging deep into what it is to be a woman, this is the mystical story of the Serranoans – villagers whose lives are rooted in the prophecies (or not?) of a marginalised madwoman

an image: amid the passage about the Serrano cats’ fertility, the mention of their special cat huts (with five evenly distributed alcoves where they could sleep) is one of the many eccentric asides of this novel

a thought: as a lifelong fan of the magical realism genre and all its accompanying dreamy timelessness, Serrano was a treat – a place that could go dozens of decades without adding so much as a comma to its annals, as Salústio writes, and where history repeated itself to the loop of the sun & the moon

a fact: this is the first novel by a woman to be published in Cape Verde, and the first to be translated into English thanks to the ever wonderful English PEN’s PEN Translates programme

want to read The Madwoman of Serrano? visit here

a nutshell: this novel follows the endless trials of a Tutsi boy, Wache Wacheke Watachoka (‘Let Them Laugh, They Will Eventually Get Tired and then Keep Quiet’), who was born in a refugee camp to a Hutu teenager raped while she fled Burundi

a line: “Nothing is static under the sun. Rain goes back to clouds, dust feeds life and returns to dust, a refugee goes back home, and a free man goes into exile.”

an image: at one moment, the child viscerally depicts their country as having vomited the refugees out of its bosom, with machetes & bullets, giving their new host nothing to love in them

a thought: there were so many aspects of this book that piqued my curiosity – from the dedication to Mr Bill Clinton to the observations about conceptual/practical intelligence (fluent in speaking French but could they eat a language?) to the eloquence with which Toyi writes of how a nose shape could trigger enmity

a fact: in 2018 I interviewed Burundian journalists running a radio station in exile while I was working with the Rory Peck Trust (under the org’s old management, I hasten to add) and was seriously moved by their stories – you can read the interview via PDF

a nutshell: this impressive debut opens with the murder of a young man in Nairobi, which leads to the unravelling of secrets within his family across 1950/60s Kenya

an image: sound plays a big role in this novel, from the human noises of accusations to the peaceful story-word vessels that Ajany’s brother Odidi created to carry her into safe borders

a thought: Owuor makes frequent use of repetition – “Odidi runs” and “What endures?” are just some of the phrases that crop up again & again; the effect is almost thriller-like

a fact: the author’s short story ‘Weight of Whispers‘ won the 2003 Caine Prize for African Writing

a nutshell: this 1991 novel follows the love life of a career-centred woman in Accra, Ghana, who divorces her husband and becomes the second wife to a charming & wealthy Muslim man

an image: in a fascinating monologue about society today and in their ancestors’ time, Esi’s grandmother conjures up the idea of a better life where it is not always the case that some humans (men) are gods and others (women) are sacrificial animals

a thought: after her husband forces her into sex, Esi later realises she had suffered ‘marital rape’ and mulls over how this would be considered an imported feminist idea, since society wouldn’t have an indigenous term for it – a husband claims it as his right

a fact: Aidoo is the subject of a 2014 documentary The Art of Ama Ata Aidoo by Yaba Badoe