a nutshell: in this title story from Qatari writer Faraj’s collection, a woman revisits an inflammatory book from childhood which transforms her perspective

a line: “the tongues of emirs, poets, and muezzins were indistinguishable from those of barflies”

an image: embedded in the narrator’s mind is an image of herself in cartoon form being chased by her father, who pelts her with hot embers as she flees

a thought: I tried to look up the book’s author, Abu al-Fadl al-Tashti, but couldn’t find anything – I’d be curious to know the significance (if any!) of this name

a fact: Faraj is an Assistant Professor at the Arabic Language Dept at Carnegie Mellon University in Qatar and has published two academic books and one short story collection (The Totem) 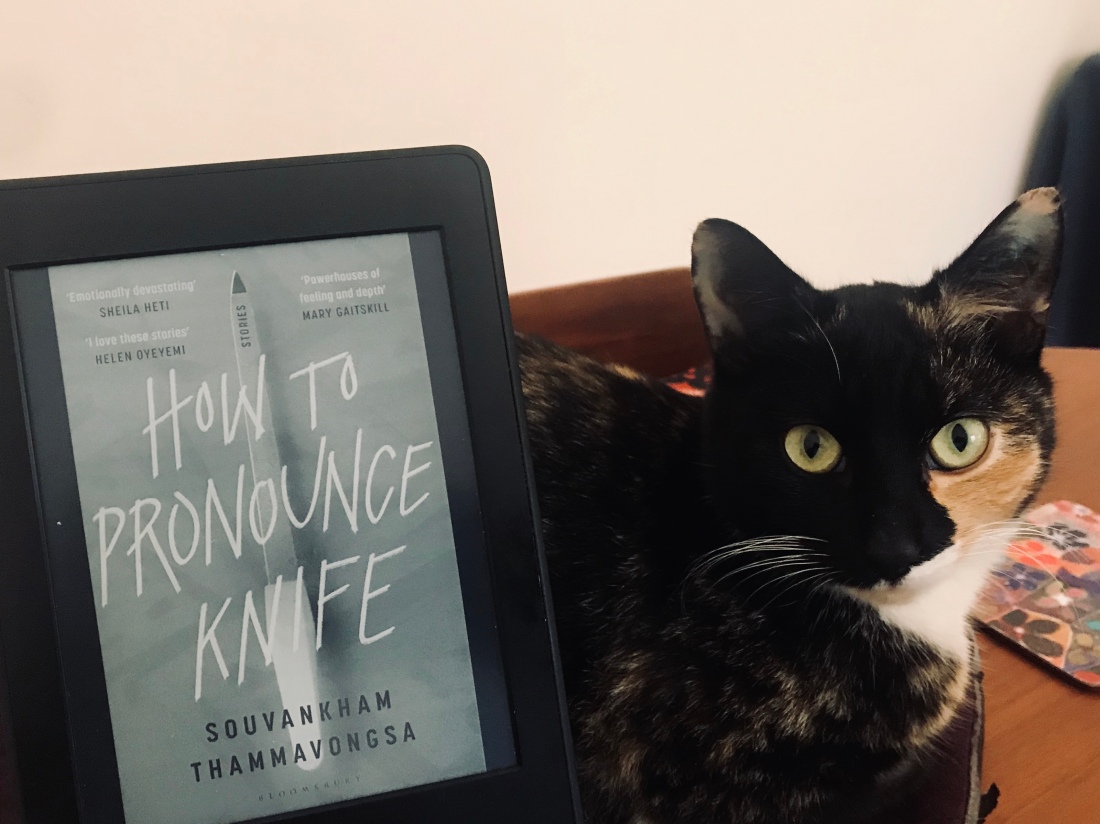 a nutshell: drawing on her own experiences, poet & short story writer Thammavongsa’s debut collection explores moments of unease or disjunction for Laotian immigrants across 14 stories

a line: “I know now what I couldn’t have known then––she wouldn’t just be gone, she’d stay gone.” (‘Edge of the World’)

an image: I liked how, despite living in the same apartment block, the two girls in ‘A Far Distant Thing’ would chat on the phone each evening to describe the details of their day – practising for their (aspiring) writing careers

a thought: the pressures & injustices involved in making a living are a recurring focus, and ‘Picking Worms’ is a particularly devastating instance of when doors are open for mediocre white people and closed for talented Lao people

a fact: born in the (Lao) Nong Khai refugee camp in Thailand in 1978, Thammavongsa and her parents were sponsored by a family in Canada when she was one year old

want to read How to Pronounce Knife? visit here

a nutshell: set in 1981, this heartbreakingly evocative novel follows a young woman as she explores her memories while attempting to flee the violence of her homeland, Jamaica

a line: “Jamaica was too young to die”

an image: a rural sign reading ‘FRESH POETRY & EGGS’ is left to interpretation – spelling or reality?

a thought: I identified strongly with the main character, Jean, particuarly in how she reads constantly – pressing her ear close to the world of fictional characters, as Cezair-Thompson describes it, like a vagrant at a windowpane

a fact: towards the end of the novel, Jean realises she has always believed in egun iponri – ancestors – which the author explains more in this insightful interview

want to read The True History of Paradise? visit here

a nutshell: among Tanzanian writer Nyachiro Lydia Kasese’s many brilliant poems, I found this one particularly moving in its reflection on the struggle to vocalise childhood trauma

a line: “and she would smell his scent on my body and know that we shared the same demons”

an image: the way in which the poet writes about whether a penny or a set of keys is in there gives this poem an atmosphere that feels paradoxically humdum & horrifying all at once

a thought: this interview shares how the scene was drawn from Kasese’s life – the moment triggered her to think back to her own sexual abuse at that age and, as she couldn’t find the words to vocalise it to anyone, she wrote about it

a fact: this poem was longlisted for the 2014 Babishai Niwe Poetry Prize

want to read Things That Were Lost in Our Vaginas? visit here 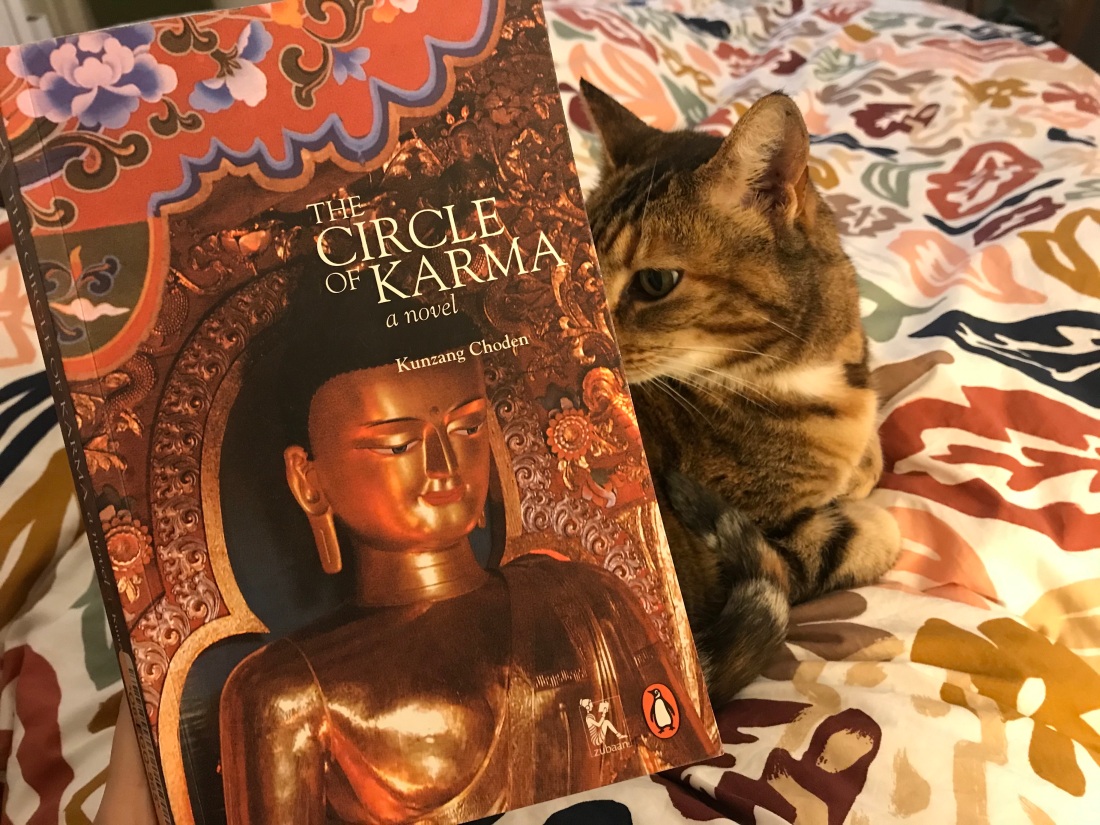 a nutshell: a young Bhutanese woman, Tsomo, sets out on a challenging & often lonely journey to discover what she really wants from life

an image: one sleepless night, Tsomo notices how the silver moonbeams enter the room, ethereal white through the gaps in the wall, and scatter on the floor like fine needles, weightless & fragile

a thought: it’s tough to convey the extent to which Tsomo’s relationships are marred by misogyny – from violent beatings to disrespectful language to flagrant infidelity, it can be enraging to follow

a fact: published in 2005, this is the first English-language novel ever written by a woman from the Himalayan nation of Bhutan

want to read The Circle of Karma? visit here

a nutshell: narrated by a conjoined twin raised in Skopje, this intricately immersive novel explores independence and love through communist Yugoslavia and beyond

a line: “Just like Bogdan, who solved crossword puzzles in his head because he had no pencil, I wrote internally because I had no space”

an image: Dimkovksa so viscerally depicts the flat in which the twins grew up that I found myself struggling to emerge into the real world after reading scenes within it

a thought: in her studies of migration in the context of the literary community, Zlata portrays two parallel worlds in which national & transnational writers joked politely but between the pair is a fear of the other’s otherness

a fact: this novel won the 2013 EU Prize for Literature 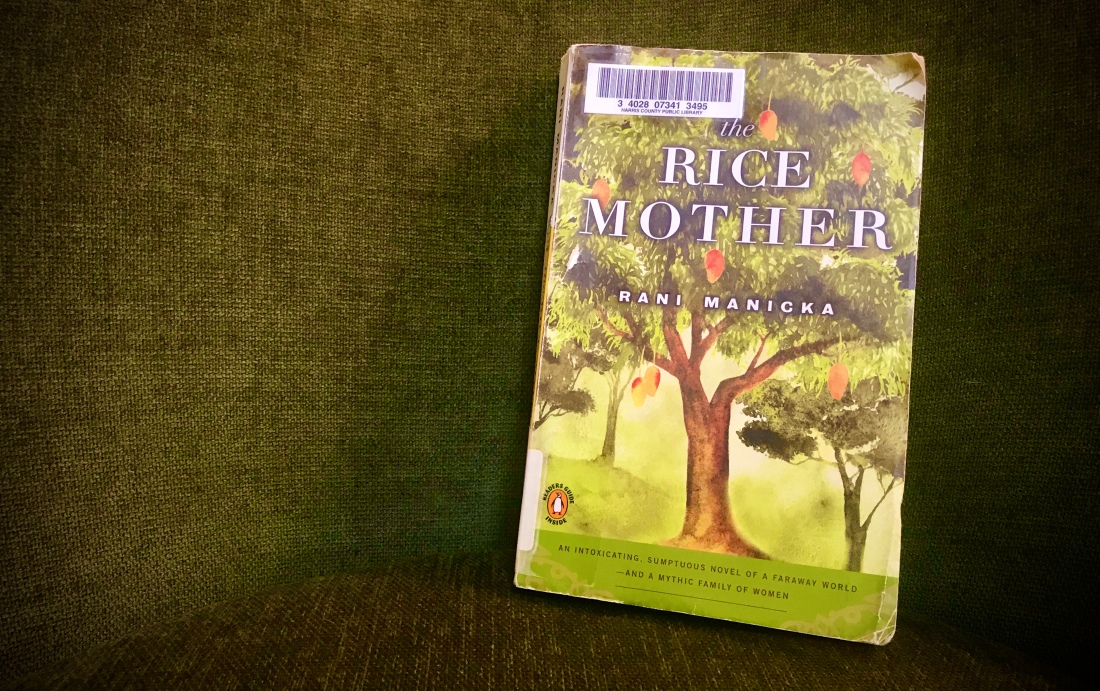 a nutshell: this often dreamlike debut novel follows the generations of a family cursed with adversity in Malaysia – through the Japanese occupation and beyond

a line: “Under her skin are fine ancestors. They are there in her hands, her face, and the shadows, happy and sad, that cross her face”

an image: I was surprised to see Australia make a brief appearance halfway through the novel during an affectionate moment between Lakshmi and her granddaughter; Lakshmi decides to begin telling Dimple all the family stories so she could leave them in her care, then one day her granddaughter announces that she’ll be creating a dream trail of their history, like Aboriginal communities “in the red deserts of Australia” do

a thought: while recalling her devastation at leaving her mother for a forced child marriage, Lakshmi reflects on how life had yet to teach her that a child’s love can never equal a mother’s pain – something that I’ve been thinking about a lot recently in comparing the way I feel about my father (in light of & in spite of his flaws) with the way his mother feels; I also wanted to mention that sometimes the vitriolic descriptions of Japanese men’s appearances (e.g. p126) were an uncomfortable distraction from the events themselves

a fact: in an interview Manicka shares how her mother would tell stories over dinner and explains that storytelling is a very natural part of Malaysian life

a nutshell: drawn from her family’s experiences among southern Austria’s Slovenian-speaking minority, this book follows the coming of age of a girl whose grandfather fought as a partisan in WWII, whose grandmother scarcely survived a concentration camp, and whose father continues to relive the trauma of torture at the hands of the Nazis

a line: “But is the peace in this region truly ours or do the languages spoken here still wear uniforms?”

an image: Haderlap portrays the war as a devious fisher of men, which has cast out its net for the adults and trapped them with its fragments of death, its debris of memory – she imagines her Father as snagged on memory’s hooks

a thought: with the world finally paying attention to the glaring epidemic of police brutality and racism, it’s worth nothing that this book makes many references to police officers’ unprovoked attacks on both children & adults during southern Austria in the Second World War, as well as the police’s violence in tearing apart families of anyone allegedly disloyal to the Third Reich

a fact: Haderlap’s focus on the effects of conflict on survivors and their children made me think back to human rights lawyer Phillippe Sands’ talk at Edinburgh Festival, where he spoke of the intergenerational traumas that prompted him to research & write East West Street in which he traces the lost history of his mother’s family in WWII